There’s a common misconception that video games make kids dumber and even violent psychopaths. But this isn’t true. Just like there was a stigma around slasher movies back in the late ’70s and early ’80s, PC and console games were a target for numerous concerned groups. Well, it kept on going even in the ’90s.

From soccer moms to self-righteous religious mobs, they were all against titles like Grand Theft Auto and various first-person shooters. However, there are numerous benefits to video games. In the following few paragraphs, we’ll list some helpful facts about why you and your kids should be gamers.

Scientists Were Able to Predict Diseases Because of World of Warcraft

Ahead of all others, World of Warcraft is still a gaming phenomenon. But aside from it revolutionizing the world of online gaming back in the early ’00s, it made headlines again when the COVID-19 pandemic hit us hard last year. Interestingly enough, scientists study the game to figure out how the coronavirus is spreading around these days.

In 2005, there was a certain bug that mimicked how viral infections work. Namely, one boss NPC would cast a spell on players that would drain their health for about ten seconds. However, the spell would last indefinitely and would spread from one player to another if they were standing close to one another, just like a real virus.

We all know how political campaigns can get dirty and tiring before an election. However, some are smart and prove to be the recipe for victory. Namely, during the last year of George W. Bush’s administration, a certain democrat nominee would appear in 18 different video games to bolster his electoral chances.

Players of Burnout, a now-famous racing video game, would drive past ads with Barack Obama’s face on them. Of course, not all of them would go out to vote for him as the 44th President of the United States of America. Yet, those who did certainly aided President Obama’s quest for the White House. Who would have thought that, right?

The First Game Played in Space Was Tetris

We all know that the video game industry is no stranger to sci-fi titles and space exploration. And why would they be? Most of us are all about aliens, spaceships, and laser guns. But did you know that the first game in space was Tetris? Yep, our next fun fact about video games is all about the all-famous Soviet puzzle game.

Back in the ‘80s, the Cold War was still raging. The U.S. and the Soviet Union would seek alternative ways to show the world their dominance instead of firing nuclear weapons at each other. But besides venturing farther and farther into outer space, the Soviets thought of new propaganda — playing their hit game, Tetris, inside a research station.

Aleksandr Seberov, a Russian cosmonaut, is among numerous entries in the Guinness book of world records as the first man to play a video game outside Planet Earth. Quite an unlocked achievement by comrade Seberov, isn’t it?

We all know how bad the state of the music industry is nowadays. But just a few decades ago, no one would have dreamed that pop and rock stars would fall so low when it comes to income. However, the internet became a thing, and nothing was ever the same since the mid-‘90s. Funnily, it seems like Lars and Metallica were right about Napster after all.

These days, most well-established artists earn money from selling the rights to their songs for a music arcade game — Guitar Hero. This title allows players to immerse themselves into thinking they’re rock and pop stars. But to have that impression, the game needs to offer them licensed tracks, so that’s how groups and solo artists earn their greens.

Tetris Is a Game That Helps People Cope With Trauma 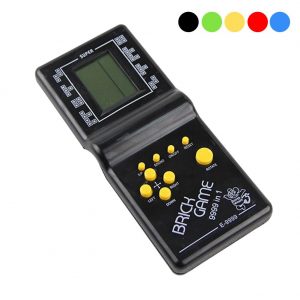 Yet another helpful fact about video games, Tetris, in particular, is that they’re great with people suffering from PTSD. Namely, several studies suggest that it’s more than welcome for people to play this game in the first few hours after the accident. This way, they’ll have an easier time letting go of the trauma afterward. But why is this so? Well, check this out.

The game itself is more than visually demanding. Its players need to focus hard on it to match shapes in a particular and satisfying order. As such, the game prevents intrusive memories, which are memories that cause post-traumatic stress disorder. Researchers are hopeful that they can find a way to use Tetris and other video games for further treatment.

FIFA’s Skill Moves Were Created by a Former Professional Footballer

When it comes to sports games, there isn’t a more popular title than EA’s FIFA. Aside from fabulous graphics and licensed teams, this football simulation offers its players to maneuver around using special moves like real-life footballers. Yet, all these moves and skills had to come from somewhere, right? Well, check this out.

All you can do with players inside FIFA are skills that come from former professional players. Moreover, these moves come from legends of the game. When you do a three-sixty around the opposition player, you’ll be mimicking Johan Cruyff. On the other hand, the Marseille Roulette comes from none other than Diego Maradona. The list goes on, and there’s no point in mentioning every move.